In anticipation of starting at Materialize, I’ve been reading through some of the fundamental literature that the product is built on. The first paper I’ve read through is Naiad: A Timely Dataflow System.

I enlisted the help of friends Forte Shinko and Ilia Chtcherbakov to help me work through it, and we ended up finding an interesting question that I’m not aware of a proof online for, so I’m going to share it today. There’s a decent amount of background we need to get through before we can even state the problem.

Our first notion is of Timely Dataflow Graphs, defined in the paper as

Essentially, they look something like this, where the coloured boxes denote loop contexts: 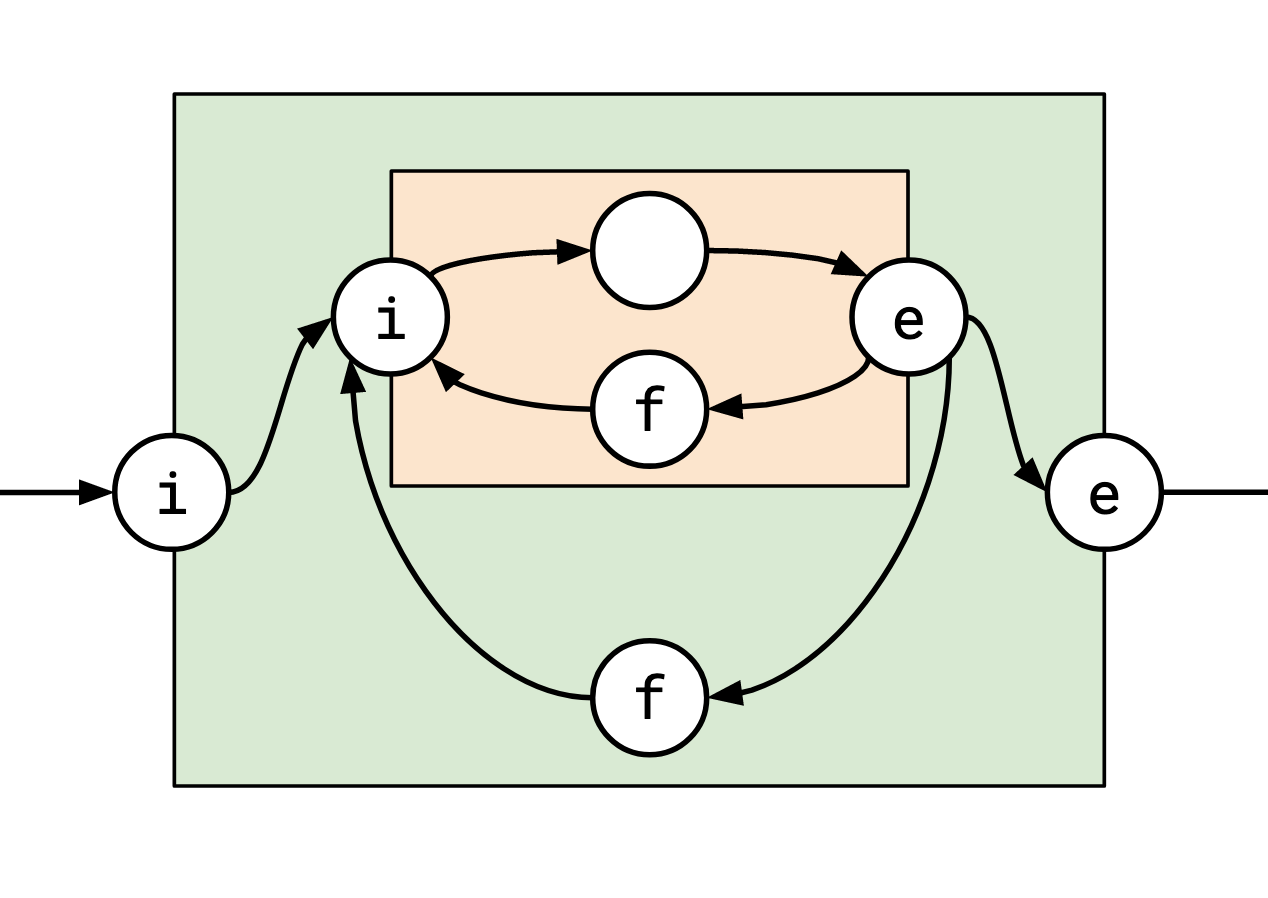 The important things to note are:

Since the loop contexts of a timely dataflow graph respect a hierarchy, they can be organized into a tree structure. 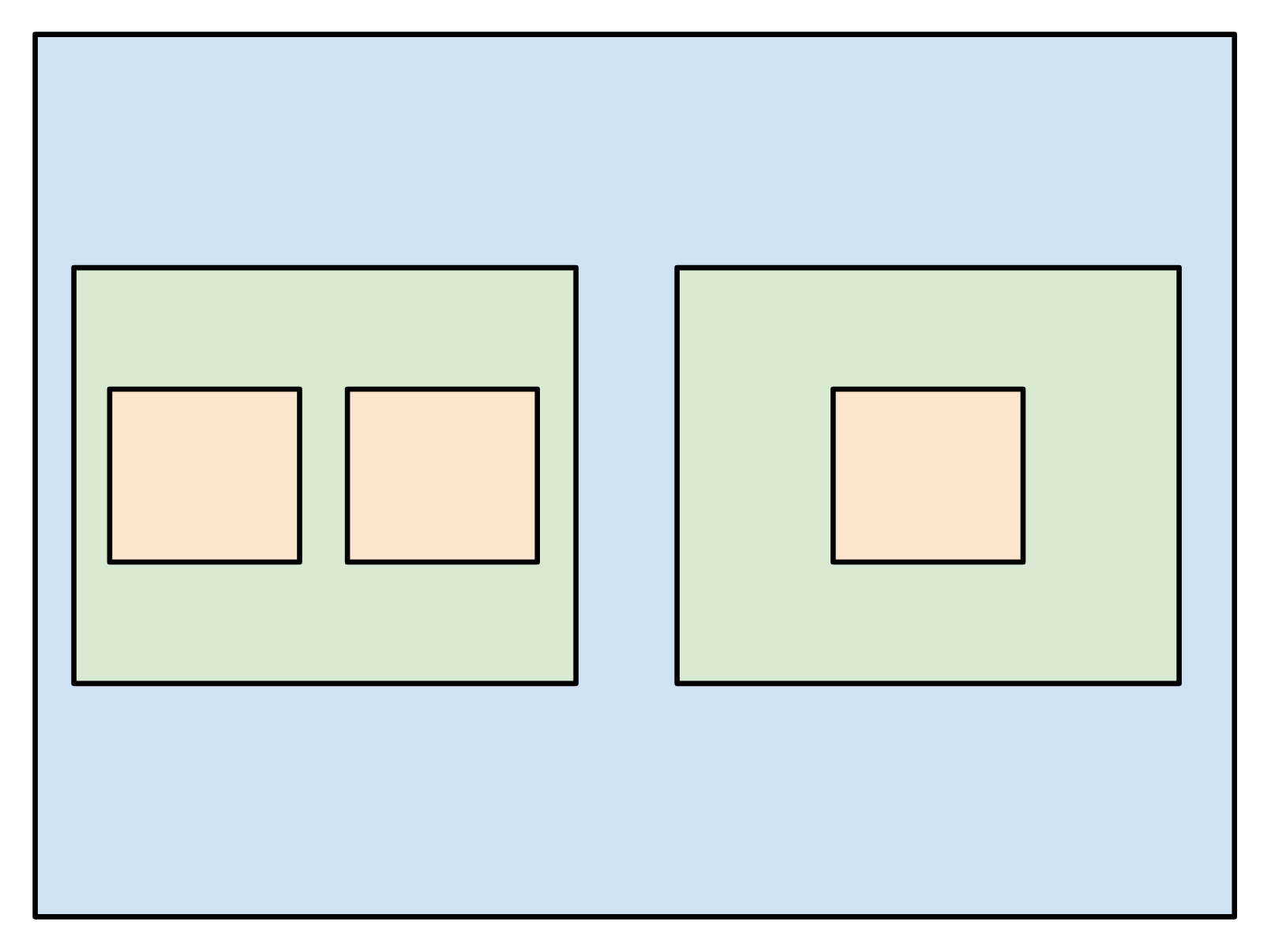 This has this corresponding tree: 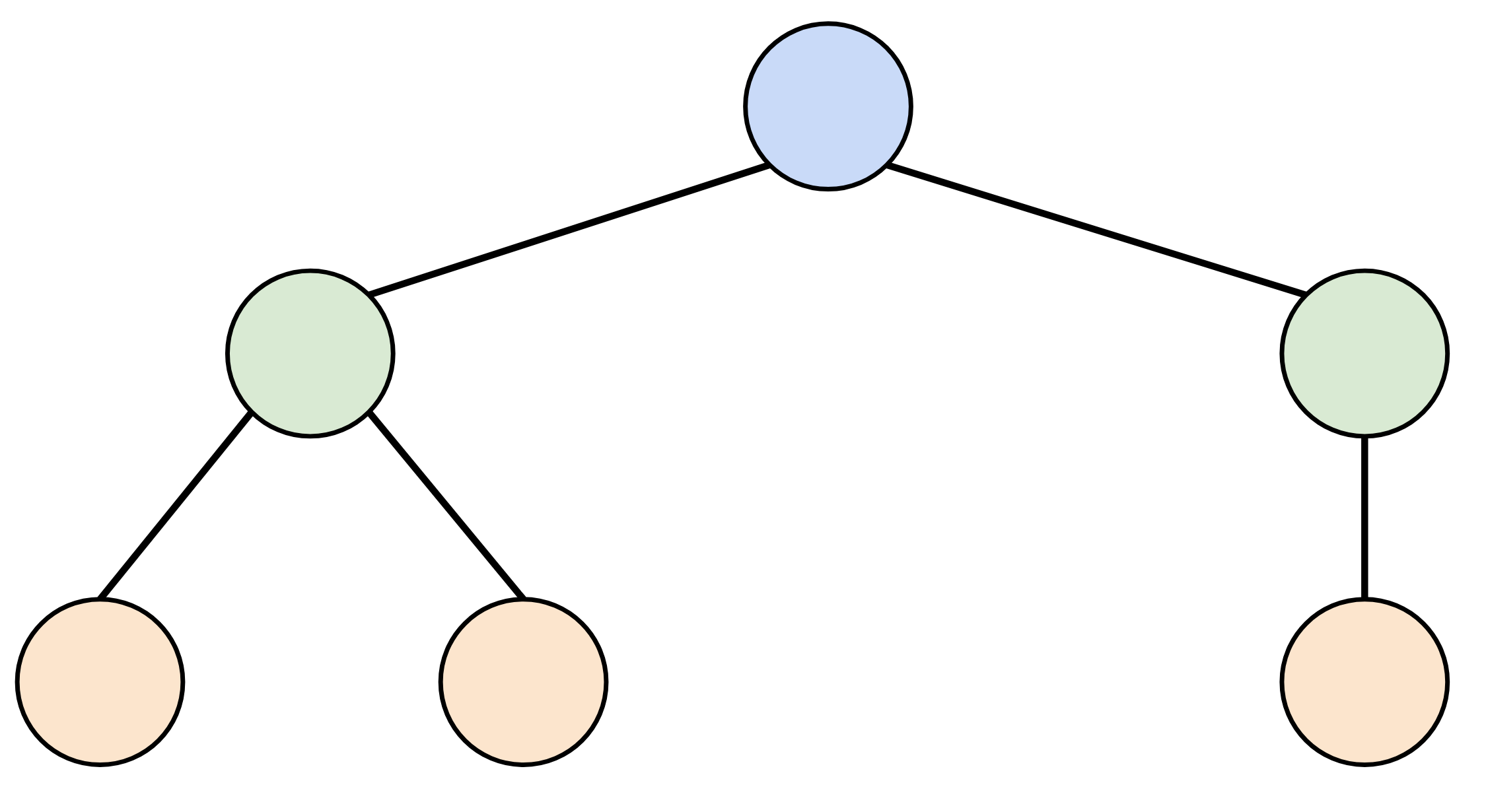 This is the dataflow graph’s loop context tree. We’ll see these a little later.

The structure of these graphs is all in service of messages passing through them. A message arrives in one end of a vertex and might (or might not) induce a message to be sent out the other end. These messages have timestamps. The timestamps are sequences of loop counters, each of which is a natural number: \[ \text{Timestamp} : \langle c_1, \ldots, c_k \rangle \in \mathbb N^k \]

Every vertex in the graph, when a message passes through it, modifies its timestamp in a specific way:

As a message travels through the graph, its timestamp will be advanced as it passes through various vertices. We can summarize what happens to a timestamp traveling along that path with a path summary of the composition of all the vertices passed through.

We can represent these path summaries as strings of the operations we see. For instance, the path summary representing passing through an ingress followed by a feedback vertex will be denoted \(if\).

We’ll notate these operations such that they apply on the right:

You might know that when you have a thing like this where you can smash two objects together as strings to get a new object, you have a monoid, and indeed, these path summaries are a monoid. For this reason I’m going to use \(1\) to represent the empty string (the path summary for the path that doesn’t go anywhere). That is, \(x1 = 1x = x\) for all \(x\).

There are two useful identities we can infer from the definition of this monoid:

These identities have an interesting property: in every scenario, they let us push all the \(e\)s in any string all the way to the left, getting a canonical form for any string, for example:

The structure of timely dataflow graphs ensures that, for any locations \(l_1\) and \(l_2\) connected by two paths with different summaries, one of the path summaries always yields adjusted timestamps earlier than the other.

And this, dear reader, is the claim we are here to verify:

The set of path summaries for paths connecting two fixed vertices is totally ordered under \(\le\).

As a note, I’m not going to be super formal here, I’m going to make some leaps that I think are justified in the interest of trying to make the argument here intuitive.

We have two vertices in a timely dataflow graph, \(u\) and \(v\) with two path summaries connecting them, \(X\) and \(Y\), and we want to show that at least one of these is true:

In fact, we will show a slightly stronger fact: let \(S_A\) and \(S_B\) be strings representing the normalized path summaries for two paths \(A\) and \(B\), connecting two fixed vertices. Then \(A \le B\) if and only if \(S_A \le S_B\) lexicographically (with \(e > f > i\)). This is quite a useful fact, because not only would it verify the truth of total-orderedness, but it gives us an algorithm for comparing two path summaries.

That we have a canonical form that looks like this is telling us something about how we should visualize path summaries.

That means we should envision them as a rise and descent through the loop context tree. While a path originally might go up and down multiple times before eventually settling on where it’s going, the normalized form shows that this doesn’t really matter for our purposes. We could make this idea more precise but it’s a bit clunky, so I’m just going to stick with this vague notion of “every path basically looks like one of these cases.” 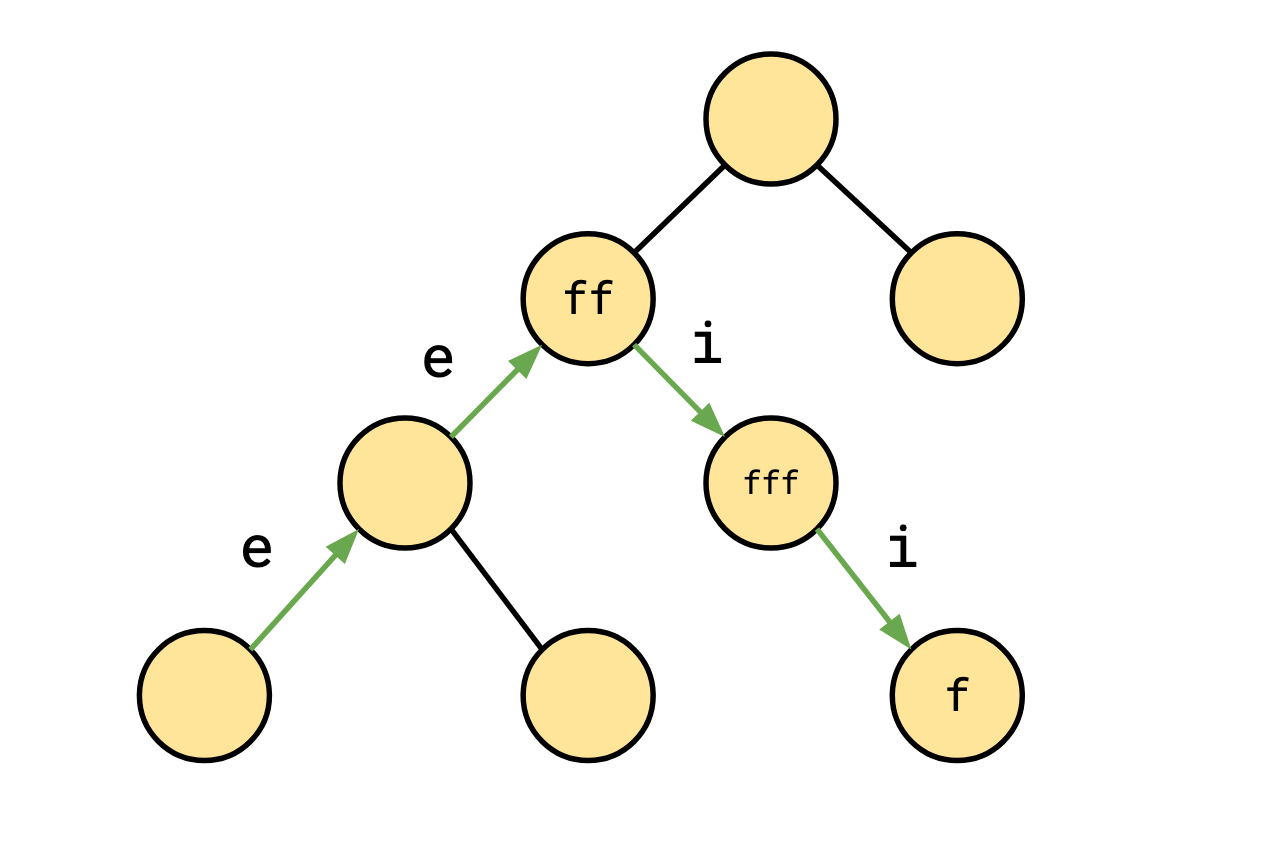 We’ll call the second kind, that revisits a loop context at some point a looping path.

It’s time to circle back to the structural property described in the Timely paper. They say:

Additionally, every cycle in the graph must be contained entirely within some loop context, and include at least one feedback vertex that is not nested within any inner loop contexts.

Let’s define the immediate loop context of a vertex or set of vertices as the smallest (lowest in the tree) loop context they’re contained in. Translating this from the paper into our terminology gives us the loop condition:

However! This is not actually sufficient to prove the theorem. I think there are some additional structural constraints not stated explicitly in the paper. We’re going to change this slightly, to:

We’re now ready to break things down into cases. Remember, we’re trying to show that two paths \(A\) and \(B\) (having normalized path summaries \(S_A\) and \(S_B\)) are comparable.

In fact they only differ in one way: the feedback vertices they hit on their journey down the loop context tree. So let the number of feedback vertices \(A\) hits at its top level \(a_1\), at the next level down \(a_2\), and so on, and the same for \(B\).

Recall that paths have a rising part and a descending part in the loop context tree. Since \(A\) ultimately winds up in the same place as \(B\), it must rise, then double back (draw a picture of this scenario if you don’t believe me, it’s not too hard to convince yourself this is true). This means that \(A\) must be a looping path. So due to the loop condition, it hits a feedback vertex at the very apex of its journey. This means that we can guarantee that \(S_A\) looks like \(e^kfX\) for some \(X\) (rather than simply \(e^kX\)).

To better visualize this, applying \(S_A = e^kfX\) to a timestamp looks kind of like this:

Since this comparison is lexicographic, the first place the two resulting timestamps differ is at the \(n\) vs. \(n + 1\) index, so that’s the comparison that will matter. Thus, \(S_A\) will always be greater, so \(B \le A\), as required.

All the symbols here make this look a little more complex than what’s actually going on: the idea is that given any timestamp, \(A\) reaches further back in it than \(B\) does, and then increments an index, so there’s no way \(B\) could make a timestamp bigger than \(A\) can.

That concludes the proof; we have a total order for the path summaries connecting two vertices. It should be noted that this is not even a consideration in modern iterations of Timely Dataflow. What constitutes a “timestamp” and “path summary” is now sufficiently general that a total order is not needed or guaranteed, and there’s some interesting math to be done around that as well.

Thanks again to Forte and Ilia for their help investigating this problem, and thanks to the folks at Materialize for reading over this post for me!